Height Measurement to Thousands of mm

For their surface comparison, Dr. Ing. Ingrid Fuchs from the "Institut für Holztechnologie Dresden (IHD)" (Wood Technology Institute, Dresden, Germany) chose a material that is particularly difficult to sand: High Density Fibreboards (HDF). They show sanding traces very easily due to the random positioning of fibres. The test specimens have been prepared on a Kündig Brilliant wide belt sander. This two head sanding machine allows for both, either parallel or oblique sanding. The sanding belts used were grain 220, 320 and 400. Surface irregularities were then measured with a MicroCAD roughness measuring device that allows for sub-micron 3d surface inspection.

Hans-Ruedi Kündig, managing director at Kündig, explains the origin of the idea for his patented oblique sanding technology: "The grain on abrasive belts is never spread perfectly evenly. It has to be that way in order to sand well. But this also means that individual sanding grains protrude more than others and therefor produce unwanted sanding traces on the work piece." Belt oscillation helps ameliorate the problem but doesn't solve it, Kündig further explains. These traces then are visible on fine sanded surfaces and especially on lacquered work pieces. "That's why we were looking for a solution." 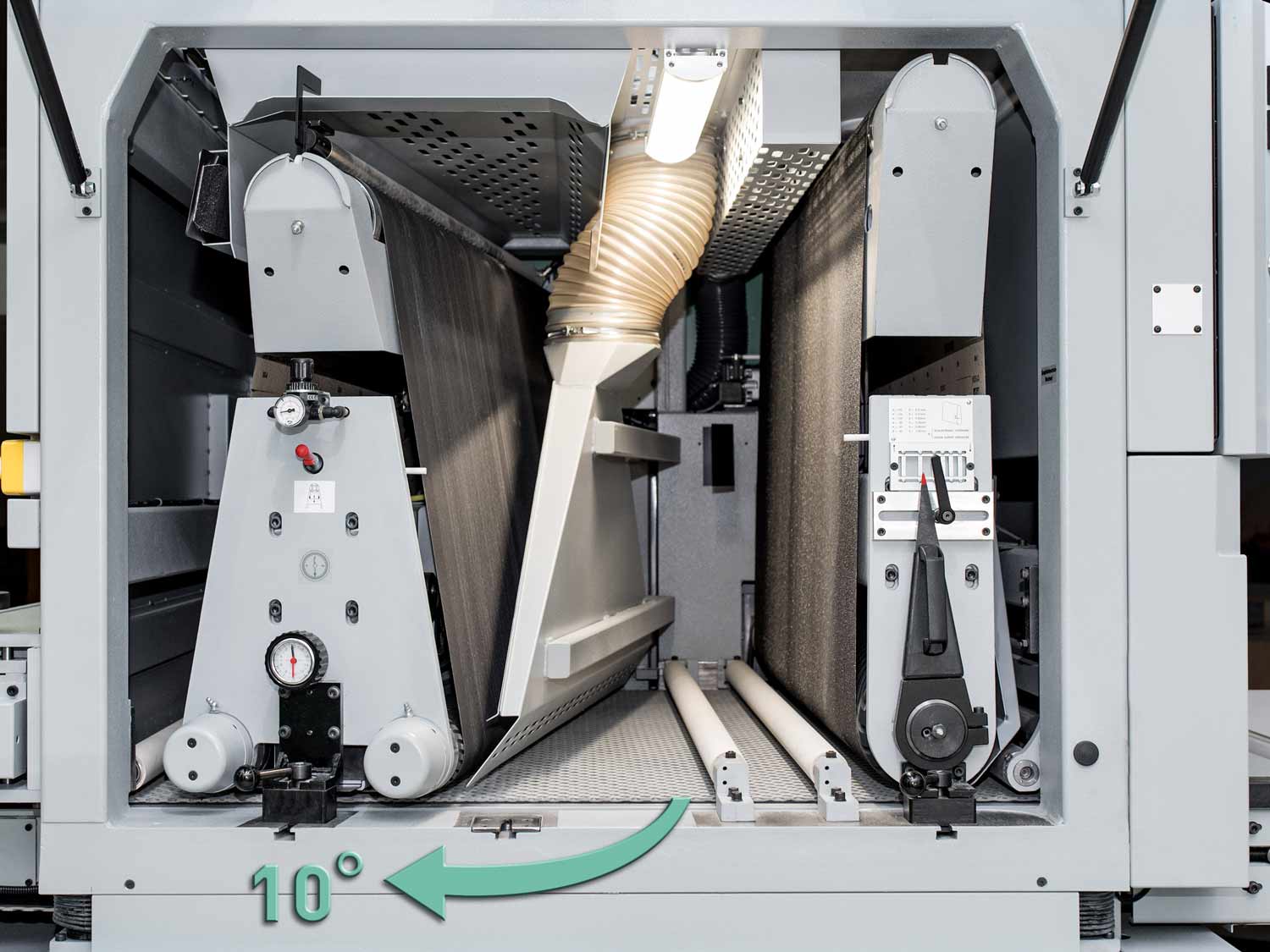 Only when Kündig engineers discovered, that a pivoted/oblique sanding belt could yield much better surface quality, the breakthrough happened, Kündig remembers: "When sanding oblique, the tilted, rotating sanding belt and the straight conveyor belt create an advanced shearing cut effect, which allows for the traces to overlap and pretty much completely vanish. That's why the surface appears much more homogeneous to the human eye."

The above mentioned advantages are now agreed on by hundreds, if not thousands of practicians, Kündig states: "Users also state many more advantages, like significantly reduced lacquer and sanding belt consumption, thanks to the enhanced abrasiveness of the sanding belts." In order to verify these observations, Kündig went to the renowned and independent IHD Institute: "Yes, we could allready feel the difference with our finger tips but we wanted scientific proof that our technology is suprerior to parallel sanding", says Kündig.

One could see a distinct trend, Dr.-Ing. Ingrid Fuchs refers to her test report: "It is apparent, that oblique sanding rawness values are smaller than with parallel sanding." 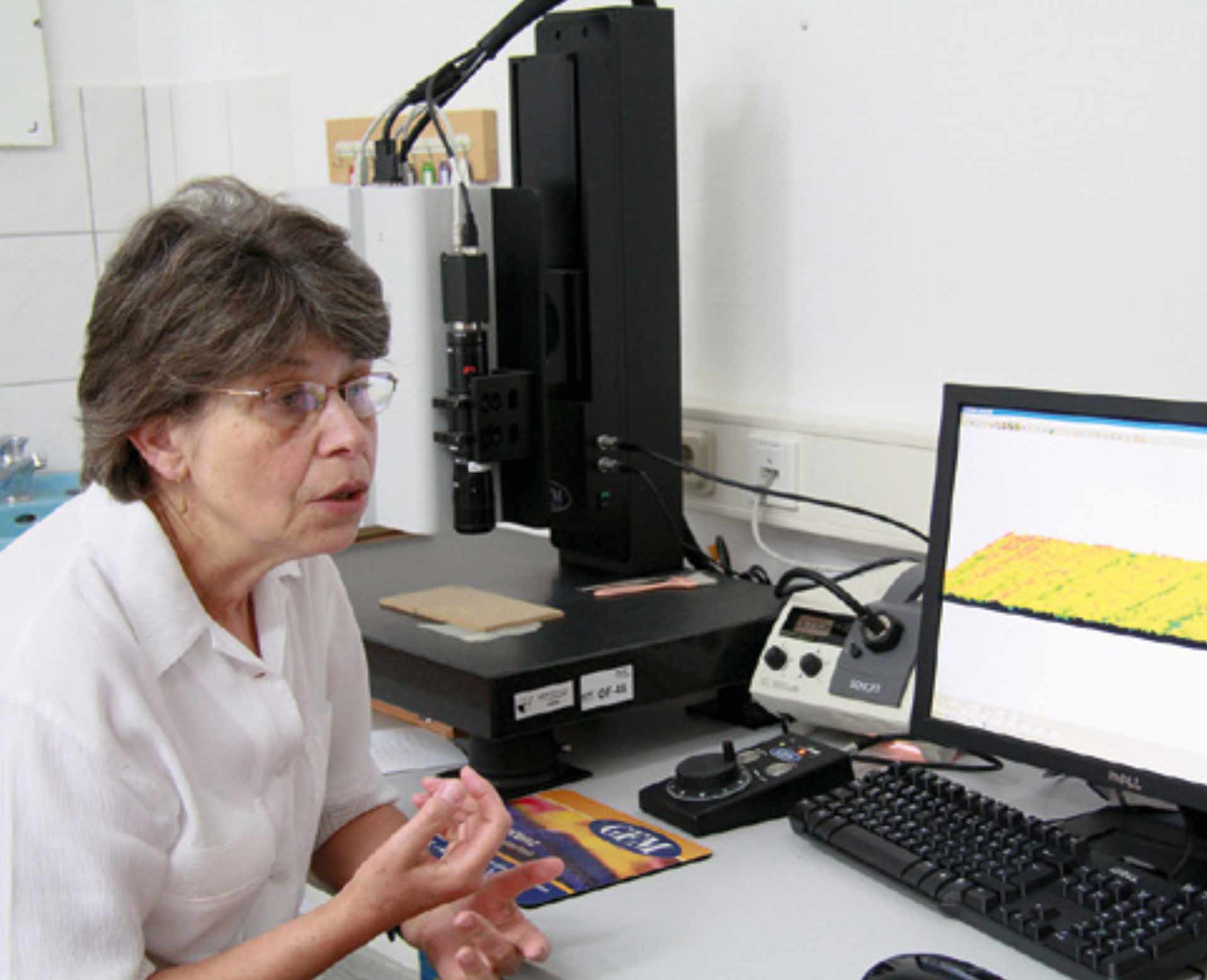 The measuring process consisted of measuring five different areas and calculating the mean value from them. In the process, Fuchs observed that standard deviations on oblique sanded pieces were smaller than on their parallely sanded counterparts. The three dimensional view of the measurement results on the graphical diagram show clearly the sanding traces on the parallely sanded workpieces while the obliquely sanded pieces appear much finer. "The obliquely sanded surfaces appear to be significantly more homogeneous", she concludes.

All the advantages of oblique sanding